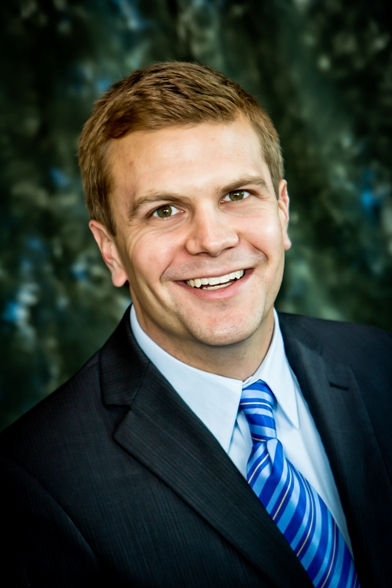 Family: “Wife, Robyn Novotny, 22. She is so loving and passionate. Mom and dad, Bruce and Christine. Brothers: Richard, Lance, Tristan, and Nathanael.”

Who do you look up to most in the Cd’A business community?
“My boss, Josh Martin.”

What famous person do you look up to?
“Bill Gates. He’s been so successful and so generous.”

“The American dream is to buy your own home and own a piece of real estate,” he said.

“And that’s what I do. Financially speaking, I walk people right up to that American dream and say, ‘Here you go, here’s the keys to your first home.’ It’s just the greatest feeling in the world,” said Steve Novotny, a mortgage loan officer of Goldwater Bank NA Mortgage Division, located in the Riverstone Village at 2065 W. Riverstone Drive.

While in the market of the American dream, Novotny’s found a big dream for himself and an even bigger dream for his hometown.

His dream, one loan at a time, one person at a time, is to build Coeur d’Alene’s housing market into a vibrant and profitable industry, benefiting the region’s economy and every individual willing to work toward buying a home.

As soon as Novotny could work, he did. He mowed lawns in his neighborhood, made house repairs with his dad, and soon got his first job busing tables. He worked his way up by being a server and eventually became a car salesman.

In the whirlpool of a floundering economy, while also attending NIC as a business major and working at Coeur d’Alene Honda as a car salesman, Novotny pinpointed the ideal job that fit his interests and needs.

“I like sales, I like people, and I wanted to be involved with the real estate community in some way,” said Novotny. “So I kind of winged it.”

‘Winging it’ led to an interview with Branch Manager Josh Martin and a job at Goldwater Bank as a mortgage loan officer.

Despite a cut of 145 mortgage and non-mortgage loan officers in Kootenai County between 2007 and 2011 according to the Idaho Department of Labor, Steve was hired right on the spot at the end of 2010.

“It was a great moment for you to come in if you’re willing to work hard and do the job right, with honesty and integrity, and to stand out from your competitors,” said Novotny.

“In order to stand out, you have to let everyone know how good at communication and customer service you are. You also have to be honest. I want everyone to have a reason to come back and do business with me.”

Novotny was named the top volume producer in 2012 for Goldwater’s Coeur d’Alene and Priest River branches.

“He is a great lender and leader,” said Debbie Inman, a longtime North Idaho real estate agent. “I have nothing but great words for him. I’ve been a Realtor for 15 years and he is the best lender I’ve ever had help me with my clients.”

“He is going to go far. He answers his phone; he returns phone calls, and he is very knowledgeable, professional, and caring.”

Karen and Jerry Schomer, customers of Novotny’s, can attest to Inman’s comments.

One instance really impressed her. The Schomers needed to sign time-sensitive documents but were in the middle of a family get-together. “Steve just drove right over so we could sign the documents,” Karen said. “He then read all the paperwork upside down, sitting across from us, so we could read along, and make sure we were aware of every detail.”

“To me it doesn’t matter what size the loan is– I treat every customer the same,” Novotny said. To me it is not the size of the loan but that they are my customer.”

Recently he received a phone call from a couple in Kansas wanting to buy a second home in Boise.

They were worried about the overall process, but the same day they called Novotny about the loan, he got back to them with an end to their worries. Here’s how Novotny recalled the conversation:

“Great news: I’ve got a clear-to-close on your loan, so we can close tomorrow afternoon,” Novotny said.

“If I were there, I would kiss you right now,” the woman said.

“Oh, thank you,” Novotny replied, laughing. “It’s been a pleasure working with you.”

January 29, 2013·by everypersonmatters· Bookmark the permalink.